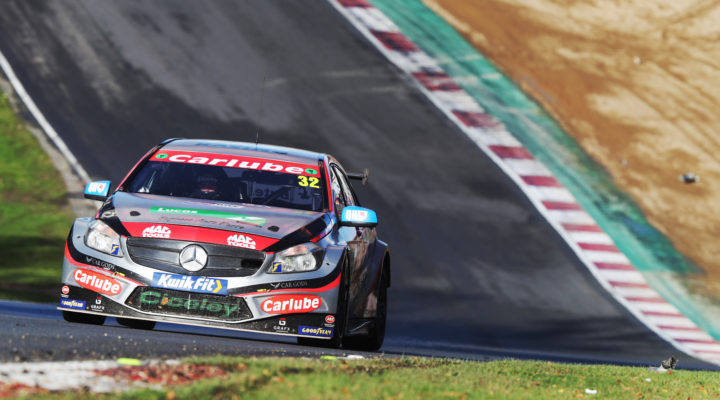 Having announced the move to the German manufacturer while running a Toyota Avensis in 2013, the new machine would join the grid the following season, with the squad’s single-car entry manned by Lancashire-driver Adam Morgan.

Bringing a second into the mix from 2018, the pair of NGTC Mercedes’ have contested 286 rounds over the years and have amassed 1,517 BTCC points.

Furthermore, the Ciceley Motorsport-run machines have achieved eight victories, most recently at the squad’s local circuit of Oulton Park with Morgan’s emotional race three win, as well as a total of 30 podiums.

Morgan’s win and a further pair of podiums in the latest campaign reflect a strong reputation for the #33 car, as the 32-year-old has finished in the points in every round he has completed this year.

The 32-year-old secured fifth place at flagfall at Brands Hatch to send the Mercedes off on a high note.

“It’s been a great car and even in its last race the Mercedes-Benz A-Class is still competitive,” he said. “You could come and buy these two cars with a comprehensive spares package, be on the BTCC grid next season and be competitive, that is how good the car has proved to be. I’ve had a win this season and been regularly up at the front, so the car still has pace.

“It’s the end of an era after seven years but we’ve had some great days and the first outright win for a Mercedes in the BTCC, so we can be proud of what we have achieved.”

Team-mate Jack Butel has manned the second Mercedes for 2020, recording an impressive near-perfect finish rate, with only one retirement throughout his rookie season in the championship.

The squad’s announcement marks the third team to reveal a change of machine for 2021, with Team HARD’s Cupra Leon announcement in September and the latest news of Trade Price Cars Racing merging with Excelr8 Motorsport to run a quartet of Hyundais next year.