The TOCA Night of Champions drew the 2021 Kwik Fit British Touring Car Championship to a close on Saturday (27 November), as the paddock gathered once again for the final time this year.

With drivers, team personnel and more donning their Sunday best, the weekend’s celebration marked the first since 2019, after the 2020 event was unable to take place due to the COVID-19 pandemic, and allowed everyone that contributed to Britain’s premier motorsport championship throughout the past two years to celebrate each other’s hard work and dedication.

Kicking off the evening, the Engineer of the Year award was presented to Laser Tools Racing’s Antonio Carrozza, for his work on Ash Sutton’s #1 Infiniti Q50…

The award was first introduced in 2016 to recognise the achievement of the Chief Engineer behind the championship-winning car and there is little doubting that Carrozza prepared a fantastic race car in 2021.

“Tony Carrozza is a magician, I can tell you that,” said Sutton. “There’s a reason I’ve got him under my belt, and I won’t let go of him very soon! It’s a relationship that’s going to last a long, long time, and between us I feel like we can bring that winning package wherever we go.

“We both know what makes each other click. He knows exactly what I want from a car. It’s an honour to work with someone that clever. The man is obscene when it comes to setting the car up and between us it’s a fantastic partnership.”

Next up was the Independent Teams’ Champion, Laser Tools Racing…

The 2021 campaign proved to be an unforgettable and unrivalled season for this particular outfit. Spearheaded by some of the best engineers, mechanics and management on the grid, Laser Tools Racing produced a potent Infiniti Q50 that its trio of drivers enjoyed piloting throughout the year.

Headlined by Ash Sutton’s amazing achievements, but superbly supported by Aiden Moffat and Carl Boardley, with Moffat in particular producing a stellar second half to the campaign, there was little stopping Laser Tools Racing from retaining its Independent Teams’ title.

The Teams’ title is arguably one of the hardest to win in the BTCC as the highly skilled and experienced manufacturers take on the professional and pacy independent outfits throughout the packed tin-top grid, with teamwork and consistent scoring vital to any challenge.

With Team BMW faltering somewhat during 2021 it was left to BTC Racing and Halfords Racing with Cataclean to provide the biggest threat to our eventual winners, but with its lineup of three-time champion Ash Sutton, the ever-improving Aiden Moffat and Carl Boardley… the Laser Tools Racing squad simply proved too good for the opposition.

The Manufacturers’/Constructors’ trophy was next up, with BMW taking the honours once again…

BMW claimed its sixth successive manufacturers’ title in the 2021 campaign, having secured the championship every year since its fully-fledged return to the series in 2017. Colin Turkington, Tom Oliphant and Stephen Jelley spearheaded Team BMW’s attack, whilst Ciceley Motorsport’s Adam Morgan was also chosen to score points on occasion during the campaign.

Challenged by the likes of Motorbase Performance and Toyota, BMW was made to work for the honour, but in truth, the Bavarian marque controlled proceedings from the mid-season point onwards.

BMW outscored their opponents at Snetterton, Brands Hatch, Knockhill, Thruxton, Croft, Silverstone and Donington Park as they continued their stranglehold on the much-coveted Manufacturers’ crown.

Dan Rowbottom’s Jack Sears Trophy domination was then celebrated, as the 32-year-old claimed the honours…

The Jack Sears Trophy is exclusively for drivers who have not stood on the podium before the start of the year, and the eventual champion of the 2021 season proved to be the clear class of the field.

Having kicked off his sophomore year in Britain’s premier motorsport series with a pair of JST victories at Thruxton, this man went on to bag an incredible 23 wins in the class during the 30-round campaign.

The Kidderminster racer not only made his first appearance on the overall rostrum during 2021 but also took his maiden BTCC victory at Oulton Park, demonstrating an affinity for his Halfords Racing with Cataclean Honda Civic Type R as he became a regular frontrunner throughout the season.

He moved into an unassailable points lead in the Jack Sears Trophy during the penultimate event of the campaign, at Donington Park, eventually lifting the JST laurels at the Brands Hatch season finale.

Unstoppable performances around Thruxton on no fewer than three occasions put Cook in contention for the Independents Drivers’ title, and whilst a sticky mid-season spell ultimately ended his challenge, his finals day double at Brands Hatch was enough for the Bath racer to secure third in Independent Drivers’ championship.

Tom Ingram enjoyed a fantastic campaign following his switch to the Ginsters EXCELR8 with TradePriceCars.com Hyundai, a move that may have caused a raised eyebrow or two during the off-season.

The decision was completely vindicated of course as Ingram was yet again a contender for the overall Drivers’ championship and took more Independents’ victories than any other driver – one more than Ash Sutton.

Six wins, a hat-trick of second-place finishes and a further four third-place rostrums was enough to secure Ingram second in the Independents Drivers’ Championship.

Consistency proved key for Sutton in the chase for Independents’ glory as he grabbed five wins, six second-place finishes and three third places, which helped him romp towards another prestigious piece of silverware.

In many ways, he was at more risk of being challenged for Independents’ honours than he was for the overall title, but he eventually sealed the deal.

13 wins over the previous four seasons – winning statistics only bettered by Ash Sutton and Colin Turkington – suggests this young man is ever-closer to claiming a maiden BTCC title.

Pole position and a double victory during the Thruxton curtain-raiser were followed by another triumph at the Hampshire venue in the summer. Josh Cook’s name has become synonymous with the fastest circuit in the country as his record there is truly unmatched.

The BTC Racing driver remained in contention as he arrived at the season finale with an outside mathematical chance of claiming the crown. Cook did everything he could with another double victory at Brands Hatch, which was enough for him to secure his highest-ever finishing position with third place overall.

Colin Turkington’s return of four wins and four podiums during the 2021 season put the record-equalling four-time champion firmly in the hunt for the overall crown, as the Team BMW star went into a ninth successive season finale in contention to win the title.

In truth, Turkington and the ultra-successful West Surrey Racing were always on the backfoot following some mid-season woes at Brands Hatch and Oulton Park respectively – venues that have so often been a favourite for the experienced outfit.

2021 proved to be one of the most commanding performances of any champion during the series illustrious 64 season history, as Ash Sutton became the youngest-ever three-time BTCC champ.

Coming into the season looking to defend his title in the No.1 Infiniti Q50, Sutton worked under the stewardship of Laser Tools Racing in its collaboration with both Team HARD and BMR Engineering.

The 27-year-old hit the ground running with his opening win coming during the Thruxton season-opener and he duly followed that with another at Snetterton next time out – moving into a standings lead that he would dominantly hold for the rest of the season.

Further victories followed on the Brands Hatch Indy circuit, in Scotland at Knockhill as well as during the second trip to Thruxton, before this true touring car star wrapped up the title in style by winning the final race of the season at Brands Hatch.

The enjoyable and well-deserved evening also comprised dinner and dance alongside the glittering trophy proceedings, although the celebrations will quickly turn into preparation, as the hard work ahead of the 2022 BTCC campaign is already underway! 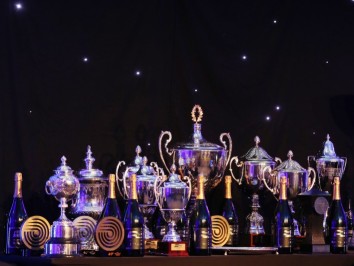 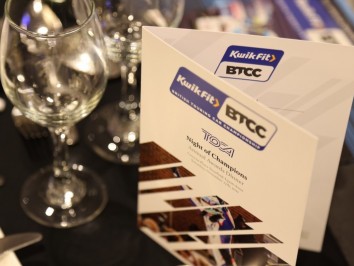 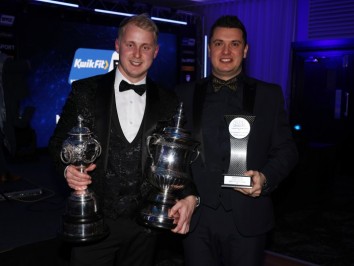 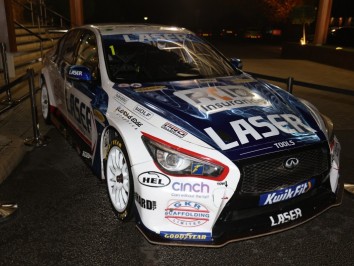 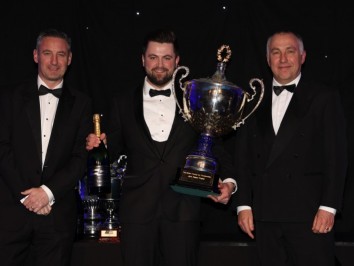 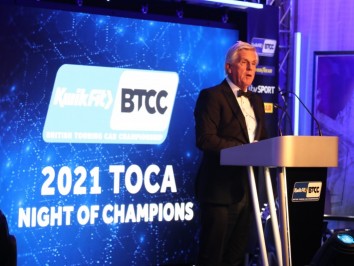 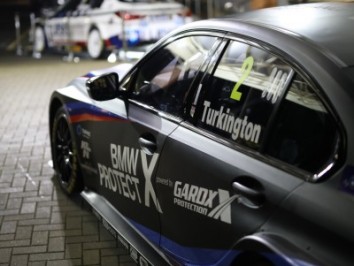 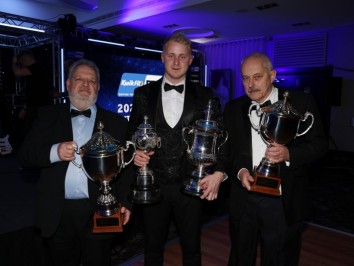 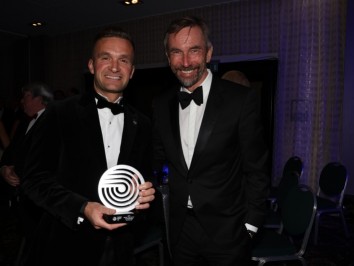 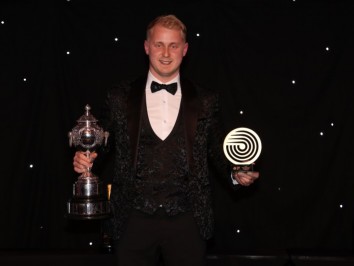 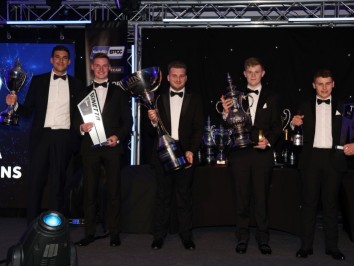